What do we do when our guest says the security deposit wasn't returned?

If a guest checks out and claims their security deposit was never returned, here's what to do:

The guest will be “refunded” (i.e. the pre-authorization is released) exactly 7 days after it was taken.

Here's where the confusion lies:
The guest sees a "pre-auth" charge in their bank account (this is not an actual charge, but rather a hold.) When the amount is automatically released, they might expect to see a “deposit” item in their statement. Instead, they see nothing, since all we've done is release the funds.

To confirm that a pre-authorization has been released, you can do so either directly in Stripe, or by clicking the receipt (which includes the refund date) that’s linked through Autohost. Assuming no claim has been made, the adjusted total will be $0.

If you wish to manually trigger the release of a security deposit pre-authorization prior to the default 7-day hold, you can do so in Stripe or in Autohost.

If using the latter option, go to the Reservations Details for a specific reservation, scroll down the page, and click on Deposit Actions > Refund (see image below). 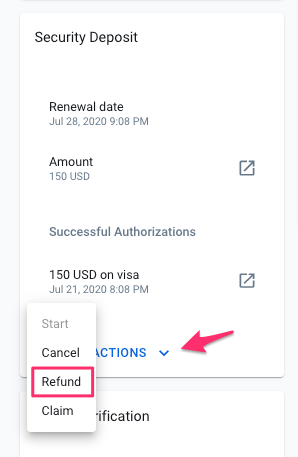